Season three had our A Million Little Things family facing challenges on screen that mirrored our own in real life. Between the forces of a global pandemic and the seismic push for social change, our group of friends navigated new and challenging territory. In season four, we'll see our group come together again in aspirational and uplifting ways as they help each other through life's unpredictable curveballs.

When we last saw Eddie, he was grappling with his life in a wheelchair and fighting for joint custody of his son. Just as he approaches a sense of normalcy and independence, a mysterious phone call from the woman who hit him threatens to turn his world upside down once more. Will Eddie learn to let go and find acceptance for his new life, or will he fall back into old destructive habits?

Finally emerging from the shadow of her marriage, Katherine allows herself to discover who she is outside of a relationship, and more importantly, who she wants to be. Katherine's journey of self-discovery takes her to some surprising new places as she shirks labels and learns to live without the word "should" in her vocabulary.

Forced home from England by circumstances beyond her control, Maggie found her groove as a podcaster, earning a loyal audience and helping Sophie find her own voice. This season, we'll find Maggie committing even further to her mission to help people, which will lead to new personal and professional heights... until a ghost from her past emerges and threatens to send her into a tailspin.

Rome and Regina watched the pandemic crush two dreams: his movie and her restaurant, but it also unexpectedly revived an old one when they became foster parents to Tyrell. But now that Tyrell knows the truth about his mother's deportation, the family harmony will be thrown into discord. We'll watch as Rome and Regina land on their feet but on divergent paths that will test the strength of their marriage.

Trapped in France during quarantine, Delilah finally returned to Boston only to find herself a stranger to her own children. Danny summoned the courage to come out at school, while Sophie sought justice against the man who assaulted her. But with Delilah determined to return to France, her kids are forced to choose between keeping the family together or staying in the only home they've ever known.

And in the final moments of season three, the guilt and anger Gary felt over Sophie's assault led him to the doorstep of the man responsible. As we unpack the events of that fateful night, we'll watch Gary fight to preserve his friendships and, most importantly, the future that he's been longing for with Darcy. 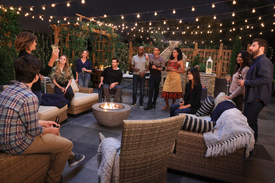 Plot Synopsis: Gary struggles in the aftermath of his encounter with Peter. Meanwhile, Regina and Rome put on a united front following the closure of Someday and the deportation of Tyrell's mother. Sophie deals with mixed emotions surrounding her mother while Delilah faces a difficult decision. Eddie inches closer to finding out who caused the accident, and Maggie navigates a new career opportunity. 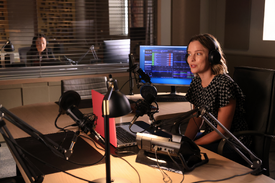 See main article: "Not the Plan"

Plot Synopsis: Gary takes steps forward with Darcy and continues to distance himself from anything involving Peter. Rome makes an effort to distract Regina from her job search, which may be looking up after all. Maggie adjusts to a new work environment, while Katherine entertains a new friend; and Eddie makes progress in more ways than one. 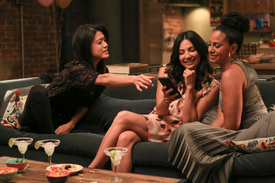 Plot Synopsis: When the girls decide to throw Katherine a celebratory divorce party, the guys get together to watch the hockey game and distract Eddie. Maggie is blindsided by some news, while Sophie is forced to stand her ground. Eddie helps Theo with a romantic gesture for a new crush and stumbles into someone from his past. 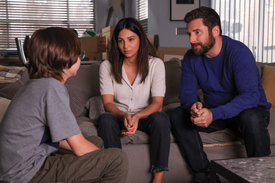 Plot Synopsis: Gary's past starts to affect his future with Darcy, while Eddie uncovers more from the night of his accident. Rome receives promising interest for his documentary, and Maggie gets a taste of workplace politics. 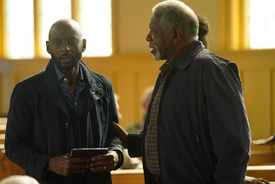 Plot Synopsis: Gary's attempt to make things right for Sophie comes with unexpected repercussions. Eddie realizes Nicole needs help in her own ways, and Maggie connects more with Jane. Katherine discovers something new about herself. 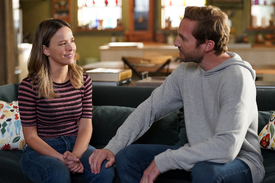 Plot Synopsis: Maggie is enjoying success at work and new love in her life, while Gary learns he needs to let go of his past. Rome experiences a curveball with his film and Regina deals with drama of her own. 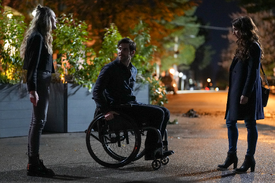 Plot Synopsis: Gary and Camden step in to support Maggie as more cryptic letters pour into the radio station. Regina continues to work through her relationship with her father while Eddie helps Sophie prepare for an audition. Katherine goes on her first official date post-divorce.

The Things We Keep Inside 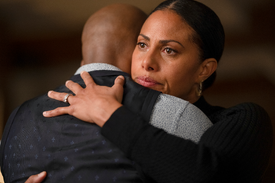 See main article: "The Things We Keep Inside"

Plot Synopsis: Rome and Regina finally reunite after months apart only to find that things feel off. Maggie does some research as her stalker situation intensifies, while Sophie plays Eddie a song she wrote. Gary helps an old friend.

Any Way the Wind Blows 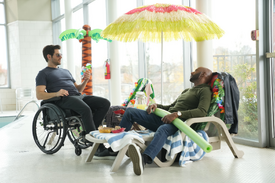 Plot Synopsis: Gary learns some new things about Maggie on their road trip to Albany. Eddie helps Rome in a time of need, and Regina sets boundaries with her father. Katherine reunites with someone from her past. 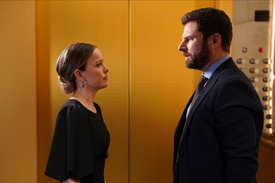 Plot Synopsis: Cam plans an elaborate surprise party for Maggie's 30th birthday, but she isn't the only one to make a shocking discovery. Meanwhile, Tyrell returns home and quickly realizes that things are not the same as when he left. 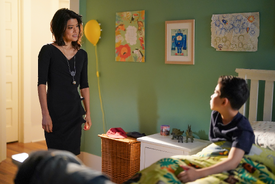 Plot Synopsis: When Katherine is rushed to the hospital in an emergency, Eddie and the rest of the group show up to be by her side. Maggie finds herself at a crossroads with Cam, and Eddie pledges honesty with Anna. 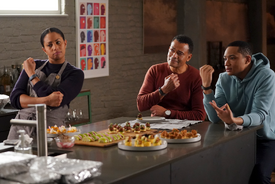 Plot Synopsis: When Cam and Maggie hit a rough patch, he looks to Gary for relationship advice. Rome and Regina embark on a new venture together, and Theo meets Greta in a chance encounter. 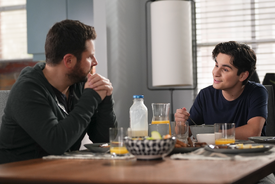 Plot Synopsis: Maggie's radio show is a proven success, yet she faces an uphill battle when her beliefs do not align with the station owners. Old wounds are reopened when Rome visits his old prep school and Katherine helps Eddie navigate the next step in his relationship with Anna. 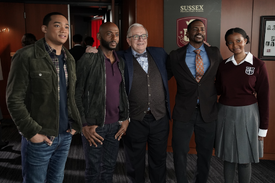 Plot Synopsis: Now that Maggie and Gary have found their way back together, they take important steps to secure their future as a couple. Regina's estranged parents reunite to support her new business; Katherine and Greta attend their high school reunion, and Rome's documentary makes an impact on impressionable students at his old prep school. 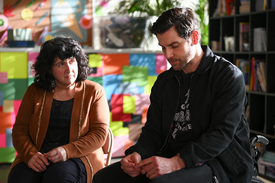 Plot Synopsis: The gang gathers for a fun and festive game night as a means to distract Gary from dwelling on a heavy situation. 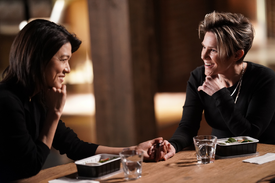 Plot Synopsis: Gary, Maggie, Eddie and Anna go on a double date where Anna has an awkward encounter with Peter. Meanwhile, Eddie struggles to reconnect with fans at a music convention. 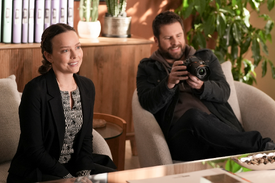 Plot Synopsis: Gary hits multiple roadblocks while trying to meet an important deadline; Eddie makes a surprising discovery at Katherine's house, and Rome struggles to connect with an impressionable group of young artists. 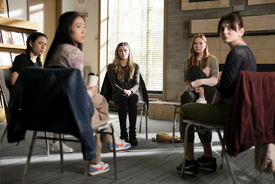 Plot Synopsis: Maggie and Gary go to great lengths to entertain an unexpected visitor; Regina fears Tyrell is moving too quickly with a new love interest, and Rome supports a student who is ready to reveal their truth. 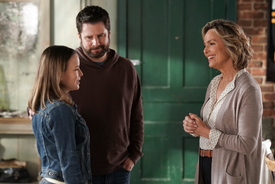 See main article: "Out of Hiding"

Plot Synopsis: Maggie receives some much-needed support from an unexpected source, Katherine grapples with her history with Shanice and her future with Greta; Rome faces off with his childhood bully and Sophie uncovers new information about Kai's relationship with Peter. 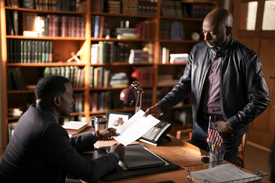 Plot Synopsis: The strength of Maggie and Gary's relationship is put to the test once again. Rome makes a sacrifice for a student in distress; Theo turns to an unlikely source to help his mom through a rough patch, and Eddie learns a shocking secret about Anna.